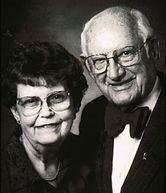 The indomitable spirit of Willie I. Kocurek is embodied in this willism.  Born in Dime Box, Texas, Willie came to Austin in 1929 to study law.  Some 51 years later he achieved that goal at the ripe young age of 70.  What took him so long you might ask.  He was busy!

Young Willie came from a family of nine brothers and sisters.  Raised on a farm, Willie learned at an early age the meaning of hard work.  He attended Caldwell High School and was valedictorian of his senior class.  His high school English and debate teacher encouraged him to go to the University of Texas and helped him get a job working at a filling station to pay his way.  He later purchased that filling station.

Willie earned his bachelor's in Business Administration in 1933 and soon after he met Maurine Gustafson at a dance he had been invited to by his filling station customers.

Courting Maurine was complicated by the fact that she didn't have a telephone.  Willie learned where she lived and the next day he bought a new white linen suit and a blue knit tie for $5.00, borrowed a friend's car and headed to the address at 511 West 18th Street.  Willie and Maurine dated for four years and in 1934 tied the knot.  Together they ran the mom and pop company that was expanded to a department store which sold appliances as well as gasoline.

Willie and Maurine enjoyed their years in business watching it grow.  The motto "You don't need money, just a little bit a month" became another familiar willism around Austin.  The store originally covered an entire block at San Jacinto and 19th and later moved to 41st and Guadalupe until 1977 when the Kocureks decided to take "renewment" instead of retirement.

At renewment Willie finally went off to law school, something he had intended to do back in 1929.  At the age of 70, after three years at the University of Texas Law School, Willie Kocurek became a Doctor of Jurisprudence.  He was the oldest person to ever graduate from the UT School of Law, a feat that got him an invitation to appear on "Good Morning America".

The Kocureks spent a lifetime in service to their community and have received recognition on numerous occasions.  Willie was chosen as Austin's Most Outstanding Young Man in 1941, as Austin' Most Worthy Citizen in 1980 and in 1990 he and his son, Neal, were chosen as Austinites of the Year.  His proudest day came in 1986 when an Austin elementary school was named after him.  Willie I. Kocurek Elementary School is located in southwest Austin.  He often refers to the school's students as his grandchildren.  Maurine was honored in 1989 at Adult Services Council's Outstanding Citizen of the Year.  She's also been active in the Lifetime Learning Institute, her PE.O. Chapter, Questors, Lions Ladies Luncheon and the Austin Czech Club, the Austin Woman's Club and her church, garden and sewing clubs.

For forty years Willie donated much of his time to education in general and AISD specifically.  When he ran for a position on the AISD School Board in 1946, Jake Pickle was his campaign manager and the campaign cost him $25.  He served for almost ten years as a school board member, the last four years as president.  Then he went on to serve as president of the Texas Association of School Boards, director of the National Association of School Boards and on the board of directors of the Region XIII Education Service Center, and chairman of "Forming the Future" for AISD in 1982-1983.  Willie was also named "Texas Hero for Children" in 1996.

The faculty and staff at Kocurek Elementary are honored to have our school named for such a wonderful, caring and outstanding man.

For more information about our school please visit our school's homepage by clicking below.